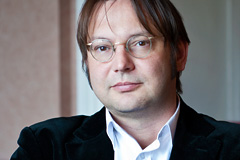 His work has been covered extensively by the media such as the New York Times, BBC world, Nature, New Scientist, Physics World, and is featured in more than 400 newspaper, radio and television reports.